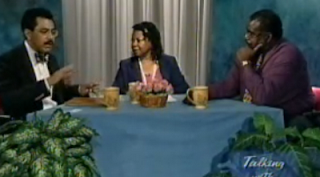 At this year's annual conference of the Alliance for Community Media, MC producer Henrietta Burroughs will receive the coveted Hometown Award for an episode of her program Talking with Henrietta.  The episode, Strengthening the Bonds Between Fathers and Children, was taped on August 26 of last year here in the studio.  This episode competed with shows from all over the country and took the prize for "Best Informational Talk Show."  The award will be officially bestowed Friday, July 29 at the annual Hometown Video Awards & ACM Leadership Awards Dinner, to be held this year in Tucson.

This episode features two experts on fatherhood, Bruce Collins, Chairman of the Fatherhood Collaborative of San Mateo County and Hector Sanchez Flores, Director of Policy and Initiatives for the Latino National Fatherhood and Family Institute. Both guests are fathers themselves and along with Henrietta explore stereotypes about fatherhood in communities of color but most importantly review new statistics that prove that men in these communities are more involved in their families than previously thought.  The program addresses the important social supports that are available to train all men to be good fathers, and how to transform families by training sons, and not just daughters, to be family-oriented adults.

This is a heart-warming, stereotype-busting insight into a topic that is often misunderstood and often controversial.   The two guests are deeply committed to their own families and in working with young men -- especially ones whom society tends to marginalize - in order to show them what an important role they have to play in their families and larger community.  When we feel connected to family and community we become their strong protectors.  Not rocket science, but it's a message that itself gets overlooked by the mainstream media in favor of more sensational headlines.

We are grateful to Henrietta for getting this message out and we are proud of Henrietta for bringing such acclaim to our station by producing her award winning show here.

Here is a link to Strengthening the Bonds Between Fathers and Children which may be watched Video on Demand (VOD) from our youtube site.

As well as being available VOD, we will be running this episode in addition to the regularly scheduled episodes of Talking with Henrietta throughout July and August.  Here is a link to the program schedule.

Talking with Henrietta is produced biweekly and can be seen on Comcast Channel 27 at 4 pm on Sundays with replays Tuesday and Thursday at 8 pm.  Ms. Burroughs is an East Palo Alto-based journalist and is editor of the print and online newspaper - EPA TODAY.